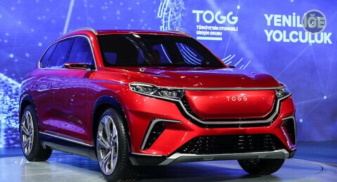 The prototype of Turkey's first indigenous electric car was unveiled on December 26th, 2019 to the public. At a ceremony held in Kocaeli’s Gebze district just outside Istanbul and attended by Turkish President Recep Tayyip Erdoğan, the new car was displayed for the first time.

In his speech, Erdoğan said that the factory will be built on a 1 million sq.m plot of land which belongs to the Turkish military in Bursa’s Gemlik district. Turkey’s first attempt at producing its own car was the Devrim (Revolution) car in 1961, but it never made it past the prototype stage. Erdoğan stressed Turkey will deter all efforts to hinder the production of the new indigenous car which has been a long-held dream in Turkey.

Two models of the car unveiled were an electric light SUV and a sedan, and were in the colours red and white, signifying the Turkish flag. Gürcan Karakaş, the CEO of Turkey's Automobile Initiative Group (TOGG), the group established for the production of the car, said at the unveiling ceremony that the car had been designed to be technologically smart and that they planned to have the production facilities completed in 2021 and the car available in 2022. He added that this fully electric car will be produced in five models with two alternative engine sizes of 200 and 400 horsepower, and will have a range of up to 500 km with locally produced Lithium-ion battery chargeable to 80% in less than 30 minutes. An annual production total of 175,000 cars is planned.

In June 2018, five Turkish industry giants; Anadolu Group, BMC, Kok Group, Turkcell and Zorlu Holding as well as an umbrella organization, the Union of Chambers and Commodity Exchanges of Turkey (TOBB), which has a 5% stake in the project, came together to form Turkey's Automobile Initiative Group (TOGG) responsible for the production of the new indigenous car. However, despite the inclusion of such powerful private sector conglomerates in the project, the funding will largely be provided by the government. In addition to providing land for the production facility, the government will be providing investment incentives, tax exemptions and a purchase guarantee of 30,000 cars per year until the end of 2035. The total expected investment in the project has been given as TL 22 billion (USD 3.7 billion) over15 years, with a workforce of over 4,000.

In weighing up the practicality of this project, there is one undeniable advantage in its favour. In addition to Turkey’s vital geographical location, Turkey in recent decades has grown into a production hub for automotive giants, among them Ford, Mercedes, Renault, Toyota, Hyundai and Fiat, and has a very strong automotive supply industry. Turkey car exports of 828.744 units in 2019 comprise some 85% of Turkey’s total production of 982,642 units, and the European Union is the largest customer for these cars. Export earnings by the Turkish automotive sector in 2019 was some USD 31.2 billion, which represents some 18% of Turkey’s total exports that year. It is therefore clear that Turkey has a very strong infrastructure to support Turkey’s new indigenous car.

On the negative side though, It has been inferred that that the new car will not turn out to be as “indigenous” as expected. Though the prototype car had been designed by the Italian company Pininfarina and previously been showcased at an exposition in Beijing, where it apparently did not make much of an impression, the licence remains in Turkey. The engine and the battery for the car are however important issues which still need to be resolved. It has yet to be seen how TOGG will come up with the technology and the manufacturing infrastructure to ensure that these are produced locally. Turkey already has a wide range of cars, buses and other vehicles assembled locally, and a high percentage of the input to these vehicles are manufactured locally. There is no point of having a so called “indigenous” car if it ends up as just another locally assembled car.

Perhaps the most important question surrounding the new “indigenous” car is whether it can be commercially viable. In 2019, 387,256 cars were sold in Turkey. Assuming that the current economic crisis eases and that the domestic car market will grow 25% for each of the next two years, the size of the market will be around 600,000 units per year at the beginning of 2022 when the new “indigenous” car becomes available. Assuming that current ratios continue, 60% of the domestic market will be met by imports, and the remaining 40%, that is some 240,000 units, will be met by local production in Turkey. A total of 175,000 units per year is planned for the new “indigenous” car, of which 30,000 will be purchased by the government for use by ministeries, state-owned enterprises and other government bodies. This leaves some 150,000 units to be sold in the domestic market. Assuming all the 150,000 units are sold locally the new car will have grabbed 62.5% of the market, putting it into direct competition with other manufacturing companies in Turkey. This may well result in a contraction in domestic production with a subsequent loss of jobs.

There is some scepticism about the viability of this new car project and there is suspicion that the ruling Justice and Development Party (AKP), under growing pressure since electoral losses last year, is merely seeking political gain from initiating this project. Such a large state-funded project needs to be analysed and discussed fully in public before implementation. The economic and technological risks need to be identified and an investment decision made accordingly. It seems that Turkey’s long-standing dream of an indigenous car, together with political and ideological motives, may well have superseded any logical and commercial justification.