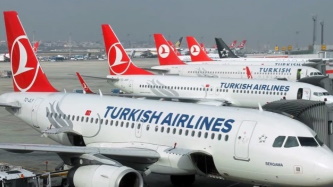 Turkey’s civil aviation sector has developed and expanded dramatically both in domestic and international arenas since the early 2000’s when the Justice and Development Party (AKP) came to power. The number of passengers passing through Turkish airports in 2018 had reached 210 million, over six times the 34 million figure for 2003. The figure for 2019 is expected to be the same as for 2018.

Economic growth in Turkey has been a major factor in the increase in passenger figures as disposable income per capita rises. As a result, there has been a rapid growth in domestic air travel in Turkey, supported by the expansion in the number of airports in Turkey. Higher international interest in visiting Turkey as a business, tourism or hub destination has brought about a surge in international flights to Turkey.

Türk Hava Yolları (THY), that is Turkish Airlines, Turkey’s national carrier, has taken pride of place in Turkey’s drive for economic growth. THY was restructured with a view to enlarging its foreign passenger market in particular, and within a short period, the company significantly expanded its fleet and added scores of new routes. It was especially successful in attracting international transfer passengers with connecting flights in Turkey, through its membership of the Star Alliance since April 2008, and Istanbul became an attractive global stopover hub as a result.

THY currently has 348 aircraft including passenger and cargo planes. In 2018, the total number of passengers carried by the airline reached 75.2 million, a 9.6% increase on the previous year, and which represented an 80% occupancy rate in 2018. In the first 10 months of 2019, THY has carried some 63.1 million passenger. This figure is likely to be around 75 million passengers for the whole year of 2019, which will therefore be the same as for the previous year. The average occupancy rate in the first ten months of 2019 was 81.5%. THY currently flies to 315 destinations worldwide in 126 countries.

Despite THY’s outstanding growth and performance in the 15 years or so following AKP coming to power in 2002, THY appears to be finally showing some signs of metal fatigue in recent years. With the increases in the cost of jet fuel, rising geo-political tensions, and the borrowing costs relating to the continual expansion of its fleet of aircraft and routes, it has been suggested that the dream may finally be coming to a close. Indeed, THY closed 2016 with operating losses of TL 374 million (USD 98.4 million). This was nevertheless largely due to the failed coup attempt on July 15th, 2016 which adversely affected international travel to Turkey, forcing THY to cut routes and carry out a major reorganisation. However, fears were somewhat allayed by the announcement by THY of an operating profit of TL 639 million (USD 168.2 million) for 2017. THY also announced that its total sales revenue had risen to TL 39.7 billion (USD 10.4 billion) in 2017, a 35% increase compared to 2016.

Just as prospects seemed to be improving, the Turkish economy has been in recession since the beginning of 2018. Fall in domestic consumption and fewer businessmen coming to Turkey have put pressure on THY’s operational capacity. The only reprieving factor has been the strong performance of Turkey’s tourism sector. The currency crisis in the Summer of 2018 and the subsequent inflationary pressures on costs have also been a severe burden. Despite, these adversities, THY still managed to achieve a 9.6% increase in passengers carried in 2018 compared with the previous year. THY also announced a profit of TL 4 billion (USD 753 million) for 2018 on March 5th, 2019, a jump of 532% on the previous year. The carrier's operating profit increased 73.5% to TL 6.2 billion (USD 1.4 billion) and its annual revenue increased 57.9% to TL 62.85 billion (USD 12.85 billion) in 2018. As of the end of 2018, Turkish Airlines' total assets had increased 59% to TL109.1 billion liras (USD 20.7 billion). THY’s financial statement also covered Turkish Airlines' 15 subsidiaries and joint ventures, such as Turkish Technic, Turkish Cargo, Turkish Ground Services, Turkish Opet Aviation Fuels and Sun Express.

There have been many raised eyebrows as to why the financials submitted to the Istanbul stock exchange for 2018 should show a profit of TL 4 billion for 2018 while the financials submitted to the tax office showed a loss of TL 8.1 billion. The major reason given was that costs of aircraft financing could be depreciated over 25 years according to international accounting standards whereas they must be depreciated over 10 years

Two major problems faced THY in 2019. First was its relocation of the centre of its operations to Istanbul’s new mega airport, Istanbul Airport, a sprawling complex opening at a cost of some USD 12 billion. Operational expenses at THY climbed by 9.2% annually to USD 9.5 billion in the first nine months of the year. The national carrier’s fuel consumption costs due to increased taxiing times and ground services surged. There have also been many teething problems relating to the new airport. Passengers have reported spending as long as 1.5 hours getting from arriving planes to the exit door, much of which time is spent walking long distances, which creates difficulties for the sick, elderly and disabled. The airport boasts impressive interior architecture and a vast array of shops and food halls, but food, beverages and parking costs are high and a metro train line that is supposed to carry arriving passengers from the complex, located 40 km northwest of Istanbul’s central Taksim Square, into the city will not be completed until at least 2021. The Sabiha Gökçen airport on the Anatolian side of Istanbul has taken advantage of the setbacks at the new Istanbul Airport as passengers flock to it as an alternative venue since it boasts better public transport connections and shorter transfer times. This has greatly benefitted Pegasus Airines, a private airline company which is THY’s biggest competitor in Turkey and uses Sabiha Gökçen Airport as its hub. The startling divergence in fortunes of the two companies is underscored in their financial earnings. Profits at Pegasus have more than doubled in the first nine months of the year to TL 1.31 billion, while net income at THY fell by 37% to TL 2.6 billion despite a 15% increase in tourists arriving to the country. Pegasus has 64 aircraft compared with THY’s fleet of 348. It is no surprise then that the stock price of Pegasus has surged this year, increasing from TL 28 per share at the start of April to around TL 75 today. Shares in THY on the other hand have remained around TL 14.

The second major problem faced by THY this year has been the grounding of 24 Boeing 737 Max type aircraft due to technical problems in the design of the aircraft. Though it is likely that THY will receive compensation from Boeing for losses relating to the grounding, the loss of use of these aircraft would have presented THY with serious operational problems.

Despite the above problems, THY has announced a net profit of over TL 2.5 billion in the first nine months of this year. This has been achieved due to some TL 3.7 billion in net profit in the August-September period, which more than compensated for the loss of some TL 1.12 billion in the first six months of this year. THY's EBITDA margin, that is earnings before interest, taxes, depreciation and amortization, stood at 32.4%, while its net profit margin was realised as 16.4%.

In its statement, THY also declared that its turnover in the first nine months increased by 1.8% year-on-year to TL 22.6 billion, giving the reason as increasing mobility in tourism and a decline in international fuel prices. Taking into account the effects of the Boeing Max crisis and the transfer of operations, THY has revised its sales revenue target for this year to USD 13.4 billion from a previous USD 14.1 billion, and its passenger target to 76 million from 80 million.

Though at first glance, THY has appeared to have succeeded in overcoming the turbulence caused by operational obstacles this year, there would appear to be some time before it can be sure of clear skies. Its share price is still very depressed which indicates some serious doubts in the markets regarding the airline’s operational and financial performance. There are claims that THY, with 49.12% of its shares publicly owned by the Turkey’s Wealth Fund, and despite the remainder being traded on the Istanbul Stock Exchange, lacks transparency. As a public entity linked to the Treasury, THY is not liable to an audit by the Court of Accounts which controls public institutions on behalf of Turkish Parliament.

Assuming that no geo-political problems arise in the foreseeable future, then if efficiently managed, THY offers good prospects for the future. Istanbul Airport will in time become more important as an international hub and Turkey’s tourism sector looks to continue to grow and contribute greatly to domestic and international air traffic. There are also signs that Turkey will gradually free itself from its present economic recession which in turn will give a boost to domestiv air travel. THY has shown that if the conditions are right it can grow and achieve high profit returns.