Will Turkey be confronted with a growing debt problem in 2020 ? 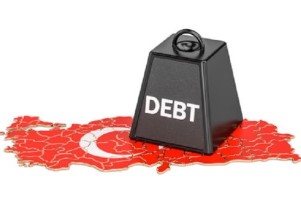 Though aversed to admit it, Turkey has in fact been in the throes of an economic recession since 2015. The strain had been building up with the economy overheating prior to the presidential and parliamentary elections of June 2018. The currency crisis which erupted in August 2018 sent the economy spiralling into a full blown economic crisis. The Turkish government has been in damage control ever since, and has used up all the resources at its disposal, including the largely state controlled media to portray a positive picture of the state of the economy and play down the suffering caused by rising inflation and unemployment, including its control over the state statistical institute TurkStat and the Central Bank to show falling inflation figures to justify cuts in interest rates, and including its control over state banks to help bail out struggling private sector conglomerates and to harness their support to prevent any volatility in the Turkish lira outside predetermined parameters.

The government wishes to pull the economy out of recession through encouraging growth, hence the wish to lower interest rates. Unfortunately, domestic demand remains weak with the fall in purchasing power, investment is low, foreign investment has distanced itself, the private sector is burdened with debt, savings are low, and confidence in the government to find a solution to Turkey’s economic woes has waned. Under these circumstances, the government’s attempts to prematurely force up growth will only result in increased imports and budget expenditure. This in turn is expected to bring about a growth in the foreign trade deficit and subsequently the current account deficit. In the past, these deficits were financed through cheap international funding, but these are no longer available.

More worrying though is the growing budget deficit. The budget deficit realised for 2019 was TL 123.7 billion, which was 53.5% over the budgeted deficit of TL 80.6 billion. The budgeted deficit for 2020 is TL 138.4 billion, and it is expected that this will be surpassed by the realisation of a deficit of around TL 200 billion. The fall in domestic consumption has drastically reduced tax income and the cost of funding is likely to significantly increase interest expenditure. The government is therefore aware of the need to increase income and has introduced a number of new taxes and tax increases accordingly. It is not so inclined though to significantly cut expenditure as this will have adverse political repercussions. The desperation of the government has been highlighted by the decision of the Turkish Central Bank to distribute in advance accumulated contingent reserves with annual profit, excluding that of last year, amounting to a total value of USD 40.5 billion to the Treasury in January 2020. With dwindling resources to counter the pressure of increasing financial imbalances, Turkey could well be confronted with a growing and irreversible mountain of debt in 2020.