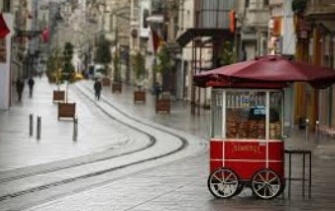 According to figures published by the Turkish Ministry of Culture and Tourism, the number of foreigners visiting Turkey in April 2020 dropped by 99.3% to 24,238 from 3,293,176 in the same month of the previous year. It is surprising that anybody managed to get into Turkey at all considering that Turkey had closed all its borders throughout April, halting all international passenger flights to Turkey.

The month of May will show the same picture, and international flights to and from Turkey will probably be initiated sometime in June depending on how soon the tailing off of coronavirus cases comes about as expected. Land borders and ports will also likely to be opened in June.

Despite the acceptance of foreign tourists in June, it is very unlikely that the numbers of tourists originally expected will materialise. Many people will be afraid to travel, especially the more elderly. The prospect of being quarantined in a foreign hotel will be daunting for many. Many hotels may decide to give this year a miss, as the precautionary measures which need to be implemented under the new sanitary and social distancing regulations may make opening the touristic facilities costly and impracticable. The hotels will also find it difficult to fill their rooms, and half of the summer season this year would have been over before they had been able to start operations.

Many hotels, especially the smaller family hotels, will be able to rely more on domestic tourism. However, it will remain to be seen whether the Turks will be ready to commit to a holiday in Turkey this year when they have the safety and relative proximity of their own homes. On the other hand, months of being locked down under curfew and mobility restrictions may drive them out in desperation.

The total number of foreigners visiting Turkey in the first four months of 2020 has fallen 51.2% to 4,262,882. The total number of foreigners visiting Turkey in the year 2019 had increased by 14.1% to 45,058,286 compared with the previous year. This figure was a record and before the coronvirus crisis Turkey’s tourism industry was expected to grow further this year and in the years to come. The pandemic has come as a big shock and it will take several years before Turkey will have recouped its 2019 strong market share. The tourism industry will need to adapt to social distancing requirements which may well continue even if a vaccine is found for coronavirus. The general average cost of a holiday abroad will also likely be more expensive, discouraging many potential tourists. The cost to Turkey’s tourism industry and to the Turkish economy as a whole will be severe this year.