Election of Joe Biden as US President presents challenges for Turkey 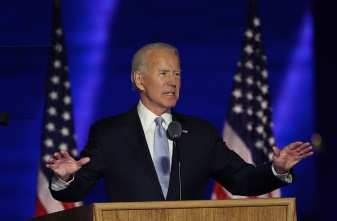 The election of the democratic party contender Joe Biden as the new elected president of the United States of America is viewed as presenting serious challenges to bilateral relations between Turkey and the USA.

Biden’s presidency will no doubt mean a tougher stance towards Turkey. There are a number of sensitive outstanding issues which the Trump administration had been delaying to resolve and it will be interesting to see what approach Biden will adopt to resolve these matters. The fact that Biden called Turkish President Recep Tayyip Erdoğan an” autocrat” last December does not bode well.

It is likely that Biden will take issue with Erdoğan’s erosion of human rights and democratic norms in Turkey, and could well impose sanctions against Turkey for its purchase and subsequent recent testing of the Russian S-400 missiles. There are also the issues of US fines against a Turkish state bank, Turkey’s closer relations with Russia, Turkey’s Syria policy, Turkey’s aggressive stance in the East Mediterranean, and Turkey’s military support for Azerbaijan against Armenia in their current military conflict. However, Biden will no doubt be aware of the usefulness of maintaining Turkey as an ally as a counter to Russia and Iran, and will probably refrain from taking reflexive punitive action against Turkey. He will however try to work more closely with state institutions and heed their recommendations, unlike the Trump administration which often ignored advice and took contrary action. Erdoğan will no longer be able to rely on a close direct relationship with the White House to influence American policy. Trump openly praised Erdoğan for his combative ruling style and called him a “friend” and a “hell of a leader”, but Washington and not the White House will now play an important role in responding to Erdoğan.

Though Biden will not be in a rush to admonish Turkey, a NATO ally, he will be under mounting pressure from Congress to impose Countering America’s Adversaries Through Sanctions Act (CAATSA), legislation that passed 98-2 in the US Senate, designed to punish aggression by Russia, Iran and North Korea and deter others from cooperating with them. Washington’s punishment regarding Ankara’s Russian missile purchase so far has been expelling Turkey from the F-35 fighter jet program. However, Turkish companies still produce components of the jets. There will clearly be bipartisan support for any action taken against Turkey, which makes it even more difficult for Biden to resist demands for sanctions.

There will however be a period of some six to nine months before Biden will feel a necessity to adopt a set strategy towards Turkey. This will give Turkey and Washington time to rebuild trust and agree on a common understanding. Erdoğan has shown no indication so far of stepping back from his confrontational stance. The Turkish economy, which is deep in recession with a weak Turkish lira, US sanctions could prove catastrophic. There is every risk of an explosive breakdown of relations between Turkey and the USA unless both sides are prepared to make compromises.