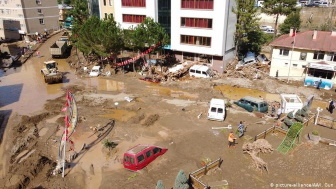 Heavy rains has caused flooding across the northern Giresun province of Turkey’s Black Sea region. Initial reports claimed that five lives were lost with 12 others missing. Among the hardest hit is the hill town of Dereli, located 30 kilometres inland from the city of Giresun on Turkey's Black Sea coast, where 13 centimetres of rain fell within less than 24 hours, with waters sweeping away bridges and wrecking buildings. The weekend rain had exceeded Giresun region's August monthly average by 1.5 times. Television footage showed vehicles and debris being carried away by floodwaters. Roads and main streets in towns and villages in the Giresun province were left covered by rocks, trees and mud. The city of Giresun’s sewerage and electrical systems failed.

The flooding on Saturday August 22nd which continued until early Sunday August 23rd had cut off access to 98 villages in the Giresun province. One of the five known dead was reported as a police officer whose vehicle was swept away. Among those still missing were four of his colleagues and a mechanical digger operator. People were stranded in buildings and on highways.

Turkish Interior Minister Suleyman Soylu and Agriculture and Forestry Minister Bekir Pakdemirli visited Giresun on Sunday August 23rd to access damage. The Turkish government has pledged to provide funds to repair flood damage, to provide grants and interest-free loan support, and to invest in projects to prevent a similar disaster in the future.