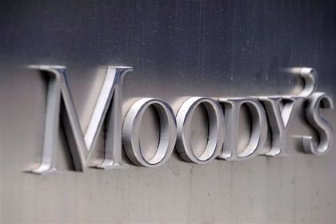 International credit ratings agency Moody’s published a report prepared by its Investors Service regarding Turkey’s external position which is seen as being under high risk. The agency’s report is as follows:

Sustained lira depreciation, steady capital outflows and a significant drop in the central bank's foreign-currency reserve position have again shifted the focus to Turkey's (B2 negative) balance-of-payments position. In this report, we answer a number of frequently asked questions from investors on the related credit risks.

» Why is Turkey’s external position now such a risk? The government has almost depleted the buffers that would allow it stave off a potential balance-of-payments crisis. Foreign-currency (FX) reserves are now at a 20-year low and the central bank's FX swap position has nearly doubled since the beginning of the year. Despite this intervention, the lira has depreciated by around 25% relative to the US dollar since the beginning of the year. As a result, the risk of a balance-of-payments crisis that triggers an abrupt economic adjustment and a deterioration in the government's balance sheet has increased substantially.

» Has this limited the range of policy options available to the government? Although this is not the first time that Turkey has seen a significant weakening in the lira, limited foreign-currency buffers and a stressed economy mean currency pressures are unlikely to ease without more aggressive policy action. However, the country’s institutions appear to be unwilling or unable to deal with these challenges. The government continues to prioritize credit growth, and political pressures on central bank independence mean real interest rates remain negative despite above-target inflation. The scale of intervention in the FX market this year makes it difficult to see the lira as a floating currency regime. As a result, there is a significant probability of a disorderly exchange rate adjustment that triggers significant economic and fiscal disruption.

» Does a healthy fiscal position not offset these credit risks? In the past, the government's balance sheet mitigated the credit pressures arising from Turkey's structural external vulnerabilities. However, we expect primary deficits and lira depreciation will lead to a rise in the government's debt burden to almost 42% of GDP next year. Moreover, high levels of foreign-currency and floating-rate debt increase the sovereign's vulnerability to shifts in investor sentiment. A high risk that contingent liabilities could crystalize on the government's balance sheet further weakens Turkey's credit profile.

Why is Turkey’s external position now such a risk?

Although Turkey has faced bouts of currency pressure before, in net terms the government has almost depleted the external buffers that would allow it starve off a potential balance of payments crisis. As of 4 September, Turkey's gross foreign-exchange (FX) reserves (which exclude gold reserves, in line with our methodology) had fallen to $44.9 billion, which is its lowest level since November 2005 and a more than 40% decline since the beginning of the year. In fact, if we net out banks’ required reserves for lira and FX liabilities, net foreign-exchange reserves are now close to zero.

At the same time, the central bank's short FX swap position has also grown significantly to $53 billion from $30 billion in March. If these swaps were not rolled over, all the commercial banks’ reserves at the central bank would be insufficient to cover this short position. Concurrently, state-owned banks have more than doubled their short FX position $4.8 billion from $2 billion in January.

Concurrently, a collapse in goods exports and an exceptionally weak tourism season due to Covid has driven the current account back into deficit after a short-lived surplus in 2019. Net portfolio account outflows have increased six times in the first half of 2020 and net FDI was half the level of a year ago. This will make the current account difficult to finance, hence the downward pressure on the lira. The hit to tourism from coronavirus will also worsen this situation because the sector generates a great deal of foreign currency.

Immediate government liquidity risks are limited because buffers comfortably cover the government's refinancing needs. Turkey also holds sizeable gold reserves that are now almost equal FX reserves ($43.6 billion in July). In part, this is because commercial banks are allowed to hold up to 10% of their reserve requirements at the central bank in gold but also likely reflects an increase in tensions with the United States and Europe.

However, Turkey's structural reliance on foreign currency to finance economic growth because of its low savings rate increases the economic risks of a balance of payments crisis. We forecast that external debt will be 67.5% of GDP in 2020, about two-thirds of which is owed by the private sector. Some of this is owed by companies with foreign-currency denominated cash flows that they can use for debt service, but much of it is owed by SMEs who are having to convert lira to FX in order to service their loans. A lack of foreign financing and a rise in the size of foreign-currency liabilities would likely lead to a sharp correction in private consumption, investment, and government consumption.

Turkey is also heavily dependent on imported energy, which is priced in dollars. Imports would likely become more expensive and lead to a spike in inflation, while the high import content of exports would limit any competitiveness gains from a weak lira. In theory, recent gas finds in the Black Sea could reduce this dependency, but they are years away from being exploited.

Dollarization intensifies these risks. Turkey has the second-highest dollarization vulnerability indicator in the single B-rated universe. Growing confidence in the domestic economy had supported de-dollarization before the currency crisis in 2018, but the share of deposits denominated in hard currencies such as US dollars or euros have accounted for over 50% of the total deposits in the banking system since 2018.

A number of state-owned banks would likely post losses on the short FX positions they have accumulated trying to defend the lira in recent months. In late January, data from the banking regulator indicates that these short positions stood at $2 billion, but they now stand at $4.8 billion. Moreover, if the state-owned banks were to see sudden and significant withdrawals of FX deposits, these short positions could suddenly be uncovered.

Has this limited the range of policy options available to the government?

Although this is not the first time that Turkey has seen a significant weakening in the exchange rate,1 limited foreign-currency buffers and a coronavirus-hit economy mean currency pressures are unlikely to ease this time round without more aggressive policy action than in 2018. However, the country’s institutions appear to be unwilling or unable to deal with the challenges it faces.

In particular, political pressure means that, in real terms, the policy rate is now negative despite inflation being well above target and a rise in inflation expectations. There is also little evident willingness or ability to introduce measures that could address the structural underpinnings of Turkey’s macroeconomic problems – the economy's chronic shortfall in domestic savings relative to the economy's investment needs, labour-market rigidities that inhibit job creation and weak productivity. The scale and number of interventions and regulatory actions in the FX market this year also make it difficult to see the lira as a floating currency regime.

Instead, the government has focused on supporting the economy via credit growth. State-owned banks have been encouraged to expand credit creation to counter the economic downturn and to offer programmes that assume and restructure credit card and other consumer debt at extended maturities and below market rates. Although some of the measures taken by the banking regulator to support domestic demand during the pandemic are now being withdrawn, credit growth is still likely to exceed 30% at the end of the year.

The government could seek outside assistance that could help it muddle through. Turkey already successfully tripled its swap line with Qatar in late May. However, its unorthodox monetary policy stance makes similar support from other central banks, such as the Fed, unlikely. The government could go to the IMF for assistance, which would be credit positive because it would likely be supportive of measures that would help Turkey durably resolve some of these challenges but this is unlikely because of the president's long-standing resistance to seeking IMF assistance.

Beyond swap lines, Turkey's size and its clear structural economic imbalances limit the meaningful support other types of bilateral assistance could provide to ease the currency crisis. Turkey's borrowing from the European Investment Bank (Aaa stable), which is the country's single-largest lender, was also frozen through at least the end of 2019 and remains heavily restricted. Sanctions on Turkey from either the United States (US, Aaa stable) or European Union (EU, Aaa stable) are possible this autumn, and military tensions in the eastern Mediterranean remain high; any of these factors could prove an accelerant that could pose material threats to the country's credit profile.

As the government's options narrow, there is a risk the government could introduce a moratorium on foreign-currency payments across some or all asset classes to preserve foreign currency or impose capital controls. Either outcomes would be highly damaging for domestic businesses and would likely constitute an event of default by the sovereign because they can impair sovereign debt service. Moreover, they would not solve the fundamental structural challenges the Turkish economy faces.

Does a healthy fiscal position not offset these credit risks?

Turkey's historically strong deficits and debt metrics compared to similarly rated peers have been a key source of support to its credit profile. However, fiscal deficits have widened markedly since 2018. In 2019 for example, the central budget deficit increased 70% year-on-year. The deterioration reflects a number of factors like unconventional policy measures to support the lira, an expensive stimulus program in 2019 to fight the aftermath of the 2018 lira crisis and steadily rising interest payments (see Exhibit 9). In 2019, the central government's interest payments rose 35% in nominal terms, compared to average inflation of 16%.

The government announced a series of tax hikes for 2020 (including an increase in income tax rates on top-bracket earners and introduction of a capital gains tax), but the weak economy, the current direction of fiscal policy to deal with the coronavirus crisis, and persistent issues like tax evasion are likely to limit their impact on Turkey's growing fiscal deficit. Unconventional fiscal policy decisions have also undermined policy credibility and highlight the extent of the government's concerns over the public finances.

We expect the weak economy and fiscal measures to manage the economic effects of coronavirus will lead to a rise in the deficit to 7.5% of GDP (using the IMF definition, which excludes one-off revenue sources). Together with lira depreciation and a rise in the government's interest costs, we expect this will increase Turkey's debt-to-GDP ratio to 42.9% in 2020 from 32.5% in 2019. Moreover, a recovery in the economy after the coronavirus shock is unlikely to offset primary deficits of more than 2% and an ever-increasing interest burden. As a result, we expect Turkey’s debt burden to increase to above 45% of GDP by 2023.

Risks to our baseline forecasts are elevated. This situation could be exacerbated if, for example, the government's desire to revive growth were to lead to larger than expected budget deficits or if it needed to cover additional losses from public-private partnerships (PPPs), the Credit Guarantee Fund or the Turkish Wealth Fund. The disclosed amounts of guarantees appear significant but manageable; the treasury-guaranteed external debt stock totalled $14 billion (1.8% of 2019 GDP) at the end of Q1 2020, and there are a further $17 billion (2.2% of 2019 GDP) of loans subject to debt-assumption agreements.”