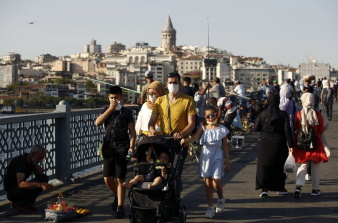 According to figures published by the Turkish Ministry of Culture and Tourism, the number of foreigners visiting Turkey in August 2020 dropped by 71.2% to 1,814,701 from 6,307,508 in the same month of the previous year. Despite the opening of some borders and international passenger flights to Turkey from some countries being allowed since June, the impact of the coronavirus pandemic on the number of foreigners entering Turkey continues to be devastating.

With restrictions on entries across borders and on international passenger flights having been largely lifted by the beginning of August, it had been hoped that the number of foreign visitors would have increased substantially in this month. With the influx of Russian tourists as of August 1st, the number of visiting foreigners did improve substantially, but was still far below the figure for the same month of the previous year. Of the 1,814,701 foreign visitors in August, 439,731 were from Russia, 639,986 were from OECD countries, with 260,846 visitors from UK and 170,007 visitors from Germany, and 255,651 visitors were from Ukraine.

The total number of foreigners visiting Turkey in the first eight months of 2020 has fallen 76.6% to 7,255,107. The total number of foreigners visiting Turkey in the year 2019 had increased by 14.1% to 45,058,286 compared with the previous year. This figure was a record and before the coronvirus crisis Turkey’s tourism industry was expected to grow further this year and in the years to come. The pandemic has come as a big shock and it will take several years before Turkey will have recouped its 2019 strong market share. The tourism industry will need to adapt to social distancing requirements which may well continue even if a vaccine is found for coronavirus. The general average cost of a holiday abroad will also likely be more expensive, discouraging many potential tourists. The cost to Turkey’s tourism industry and to the Turkish economy as a whole will be severe this year.