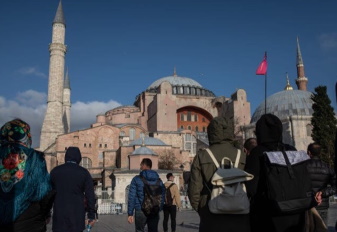 According to figures published by the Turkish Ministry of Culture and Tourism, the number of foreigners visiting Turkey in November 2020 dropped by 61.9% to 833,991 from 2,190,622 in the same month of the previous year.

With restrictions on entries across borders and on international passenger flights having been largely lifted by the beginning of August, it had been hoped that the number of foreign visitors will recover substantially in the following months. Indeed, there have been noticeable improvements in September, October and November compared with previous months. Russian tourists, who have been allowed in as of August 1st, were recorded as 127,116 (a fall of 34%) in November. Visitors from Germany were 34,489 (a fall of 81.5%) and the number of visitors from OECD countries in total were 138,450 (a fall of 74.6%). Visitors from Bulgaria, who mostly come for cross-border shopping, held up comparatively well with 143,269 (a fall of 37.8%). Ukraine was prominent again with 37,098 visitors ( a fall of 17.4%).

The total number of foreigners visiting Turkey in the first 11 months of 2020 has fallen 72% to 12,034,883. The total number of foreigners visiting Turkey in the year 2019 had increased by 14.1% to 45,058,286 compared with the previous year. This figure was a record and before the coronvirus crisis Turkey’s tourism industry was expected to grow further this year and in the years to come. The pandemic has come as a big shock and it will take several years before Turkey will have recouped its 2019 strong market share. The tourism industry will need to adapt to social distancing requirements which may well continue even if a vaccine is found for coronavirus. The general average cost of a holiday abroad will also likely be more expensive, discouraging many potential tourists. The cost to Turkey’s tourism industry and to the Turkish economy as a whole will be severe this year.