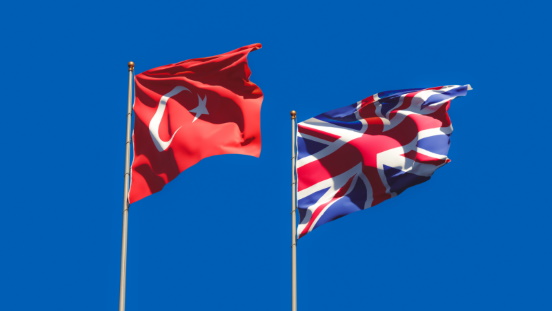 Turkey has signed a free trade agreement with the UK. This is UK’s first such agreement since agreeing a Brexit deal to leave the European Union, and brings to 62 the number of agreements signed by the UK in preparation for its exit from the EU single market. The deal with Turkey is the fifth-biggest free trade agreement the UK has negotiated after deals with Japan, Canada, Switzerland and Norway.

The continuity agreement, signed by both trade ministers today in a video conference call, takes effect on January 1st, 2021, will not only ensure that the existing flow of goods will not be affected when the UK formally leaves the EU at the end of the year, but will also strengthen ties between the two European outliers. The deal has however yet to be ratified by the countries’ parliaments.

Trade between London and Ankara was worth USD 16.7 billion in the 12 month period up to and including November 2020. In this period, Turkish exports to the UK were USD 11 billion and UK’s exports to Turkey were USD 5.7 billion.  The UK is Turkey’s second-biggest export market, mostly for precious metals, vehicles, textiles and electrical equipment. While Turkey is not an EU member, it does have a customs union with the EU, meaning that the new UK-Turkey deal could not be struck until after the Brexit deal was finalised.

According to UK’s international trade secretary, Liz Truss, “Today’s deal delivers vital certainty for business and supports thousands of jobs across the UK in the manufacturing, automotive and steel industries”. She added that it paved the way for a new, more ambitious deal with Turkey in the near future, and is part of our plan to put the UK at the centre of a network of modern agreements with dynamic economies.” The UK Department for International Trade sees the new deal as securing existing preferential tariffs for 7,600 UK businesses exporting machinery, iron and steel to Turkey, and protecting automotive and manufacturing supply chains.

Turkish Trade Minister Ruhsar Pekcan called the deal a landmark in UK-Turkish relations. “Without a deal, about 75% of Turkish exports to the UK would be subject to tariffs, causing the loss of some USD 2.4 billion.”

The accord also commits both countries to discussions aimed at expanding the scope of the agreement to include services and agriculture within the next two years.

The UK Department for International Trade’s press release on December 29th, 2020 relating to the agreement was as follows:

“UK and Turkey sign trade deal. The UK and Turkey have locked in tariff-free trading arrangements, which will support our trading relationship worth £18.6 billion in 2019, and committed to working towards a more ambitious trade agreement in the future.

The agreement lays the groundwork for a more ambitious UK Turkey trade relationship in the future.

The deal will secure existing preferential tariffs for the 7,600 UK businesses that exported goods to Turkey in 2019, ensuring the continued tariff-free flow of goods and protecting vital UK-Turkey supply chains in the automotive and manufacturing sectors.

Both countries have also committed to working towards a more ambitious free trade agreement in the future, which will go further than the existing deal and will be tailored to the UK economy.

Today’s agreement will ensure preferential trading terms for UK businesses that exported more than £1bn worth of machinery, and iron and steel exports worth £575m, to Turkey in 2019. It also ensures UK businesses can continue to import under preferential tariffs, compared with no agreement. This supports UK importers of textiles, where the annual increase in estimated duties would have been around £102m under WTO terms. Tariffs applied to UK imports of washing machines and televisions will remain at 0%, compared to up to 2% and 14% respectively under WTO terms. Vital UK-Turkey supply chains will also be protected for automotive manufacturers, such as Ford, which employs 7,500 people in the UK. Car parts are imported from the UK to Turkey to assemble the Ford Transit range of vehicles, a third of which are then exported to the UK. In 2019, UK car exports to Turkey were worth £174m.

In under two years we have now reached agreement with 62 countries – and the European Union – to cover £885 billion of UK trade. This is unprecedented, with no other country ever negotiating so many trade deals simultaneously. The Government’s ambition is to secure free trade agreements with countries that cover 80% of UK trade within three years

“Today’s deal covers trade worth more than £18 billion, delivers vital certainty for business and supports thousands of jobs across the UK in the manufacturing, automotive and steel industries.” “It paves the way for a new, more ambitious deal with Turkey in the near future, and is part of our plan to put the UK at the centre of a network of modern agreements with dynamic economies. More trade and investment will drive economic growth across our United Kingdom and help us build back stronger from Covid.”

“Ford welcomes the announcement today of a trade agreement between the UK and Turkey, and the speed with which it has been concluded underscores its importance to the economic prosperity of both countries.“ As Europe’s leading commercial vehicle brand, Ford’s Dagenham engine manufacturing facility in east London exports much of its diesel engine production to our Ford Otosan joint venture in Turkey where the engines are fitted into Ford Transit vehicles, many of which are then exported from Turkey to the UK. “Given that Ford and Ford Otosan business constitutes more than 10 per cent of the total trade volume between the UK and Turkey, this trade agreement is extremely significant for us and will help to secure jobs in both countries.”

“This agreement will maintain bilateral trade worth over £18bn and will shore up key supply chains across many industries after a year of disruption. “Turkey’s customs union with the EU made a trade deal with the UK complicated, but the pace at which the deal has been finalised following the negotiated EU deal shows the strength and depth of the relationship. “Businesses and government must now look to growth, creating the trading relationships which will build a competitive, dynamic and progressive future economy.””