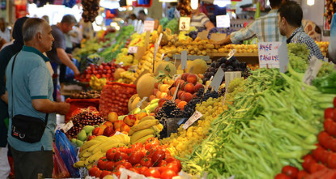 Annual increases were recorded in alcoholic beverages and tobacco with 31.32%, followed by miscellaneous goods and services with 20.34%, housing with 14.52%, health with 12.86%, restaurants and hotels with 12.55%, education with 12.35%, and food and non-alcoholic beverages with 11.28%. The lowest annual increase was recorded in communication with 1.55%, followed by clothing and footwear with 4.90%, entertainment and culture with 4.91%, and communication with 5.54%.

There is much speculation as to the accurateness of the inflation figures produced by TurkStat as ordinary citizens understandably feel that they have experienced a much higher rise in the cost of living over the last year. The on-going coronavirus pandemic is having a mixed effect on inflation in Turkey. Lower petrol costs have considerably lowered transportation costs. On the other hand, the Turkish economy, already weak from the current economic recession, is under pressure as global trade contracts and many businesses close down, and the consequent weakening Turkish lira (having lost a value of around 18.5% since the beginning of this year) will have an inflationary effect on the economy. During the current period of lockdown, the food sector has become at the forefront of consumption and strong demand in this sector has increased food prices. Sectors which can be accessed online, such as clothing, have also continued to be in demand as access to other sectors become restricted.

The Turkish Central Bank last week revised its year-end inflation forecast for 2020 downward to 7.4% from a previous prediction of 8.2%. The Bank has also forecast an inflation rate of 5.4% by the end of 2021.