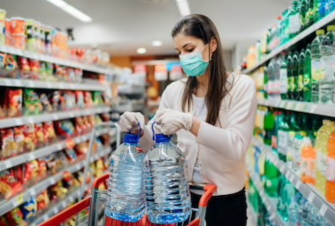 The Turkish Statistical Institute (TÜİK - TurkStat) announced an increase in the consumer inflation rate for March 2020 compared with the previous month as 0.35%, resulting in a decrease in the annual-to-date rate to 11.86% from the previous month’s rate of 12.37%. Market expectations were that the monthly rate would be slightly lower at just below 0.50%.

Annual increases were recorded in alcoholic beverages and tobacco with 40.19%, followed by miscellaneous goods and services with 17.21%, housing with 15.31%, restaurants and hotels with 13.68%, education with 13.37%, health with 12.81%, and food and non-alcoholic beverages with 10.05%. The lowest annual increase was recorded in communication with 2.52%.

There is much speculation as to the accurateness of the inflation figures produced by TurkStat as ordinary citizens understandably feel that they have experienced a much higher rise in the cost of living over the last year. The on-going coronavirus pandemic is likely to have a mixed effect on inflation in Turkey. Lower petrol costs have already lowered transportation costs. On the other hand, the Turkish economy, already weak from the current economic recession, is under pressure as global trade contracts and many businesses close down, and the consequent weakening Turkish lira (having lost a value of close to 13% since the beginning of this year) will have an inflationary effect on the economy.