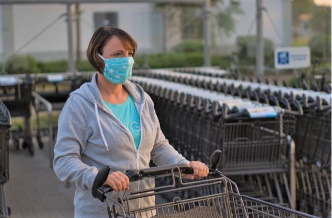 The highest monthly increase was recorded in clothing and footwear with 6.85%, followed by transportation with 3.30%, miscellaneous goods and services with 1.92%, communications with 1.47% and household goods with 1.15%. The lowest monthly increase was recorded in restaurants and hotels with 0.16%, followed by health with 0.22%, and food and non-alcoholic beverages with 0.24%.

The lowest annual increase was recorded in communications with 2.98%, followed by entertainment and culture with 3.74%, transportation with 6.69%, and clothing and footwear with 7.68%

There is much speculation as to the accurateness of the inflation figures produced by TurkStat as ordinary citizens understandably feel that they have experienced a much higher rise in the cost of living over the last year. The on-going coronavirus pandemic is having a mixed effect on inflation in Turkey. With people isolated in their homes and many people not earning or with reduced income as a result of the lockdown, demand for many products has dropped sharply. Other products which are needed or are advantageous during the lockdown period have on the other hand been more in demand. These developments have resulted in pressure on pricing accordingly.