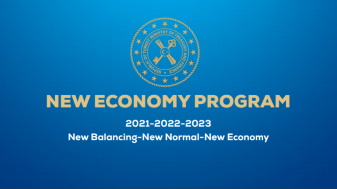 Albayrak claimed that the government had been successful in steering the Turkish economy through the first two quarters of the year faced with the challenges imposed by the coronavirus pandemic, adding that the economy had entered a rapid recovery process as of July as part of a “V shape” economic recovery. He emphasised that the contraction in the economy of 9.9% in the second quarter compared well with developed world economies. He failed however to outline the costs of maintaining economic indicators since the beginning of the year in face of the pressures of both the on-going economic recession and the pandemic in terms of a collapse in foreign currency reserves, a growing fiscal deficit, a negative interest rate, a growing current account deficit, and an inflation rate rising to 11.77% which forced the Turkish Central Bank to recently raise its interest rate by 200 basis points.

Despite the disturbing developments in the Turkish economy, Albyarak appeared confident and presented a positive outlook. He outlined the themes of the program as "new stabilization, new normal, and the new economy."

Albayrak pointed to the importance of reducing inflation permanently to single digits for setting price stability. He said that the program targeted a 10.5% inflation rate for this year, and forecast a fall in this rate to 8% in 2021, to 6.0% in 2022, and 4.9% in 2023. With the current official inflation rate at 11.77%, and following the inflationary effect of the recent collapse in the Turkish lira, it is unlikely that this year end forecast inflationary rate will be met.

Albayrak said that "To reach our growth targets, we will focus on exports, value-added production, and employment as we've always done", and that the government will implement policies for economic recovery during the post-pandemic period to support the labour market. The New Economic Program projects the unemployment rate to reach 13.8% this year and 12.9% in 2021, and gradually drop to 10.9% by 2023.

The exchange rate targets of the New Economic Program are very unrealistic to say the least. The average Turkish lira rate to the US dollar in 2021 was given as TL 7.68, TL 7.88 in 2022, and TL 8.02 in 2023. The TL value to the US dollar is likely to surpass all three targets within the next few weeks. Albayrak made an unfortunate comment to journalists  at the presentation that “for me, the exchange rate isn’t important, I don’t even look there”.

At the New Economic Program presentation, reference to structural reforms was made but no details were given. The need to reform the economy was repeated and Albayrak  promised to continue to implement “strategic reforms” focused on competition, technology and efficiency, reducing vulnerabilities in inflation and current account balance. He said that they would “change Turkey into a global centre of attraction in production and investment by transforming the disruptions in the global supply chain after the epidemic into opportunities”.