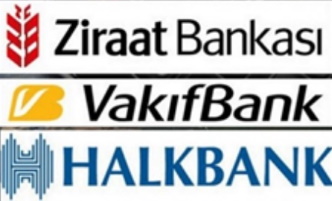 Turkey's three largest state lenders have announced that they will be extending a new loan incentive scheme with reduced rates to invigorate transition to normalization and revive social life, as economic activity steps up following a slowdown due to the coronavirus pandemic. Ziraat Bank, VakıfBank and Halkbank will begin offering four new loan packages, including mortgages for new houses, loans for vehicle purchases, locally manufactured goods and holiday expenses at annual interest rates running below inflation, and with grace periods of as much as a year.

The mortgages for new houses will have up to 15 years maturity with interest rates as low as 0.64% and a grace period of up to 12 months. Similar loan opportunities will be introduced for individual and corporate customers who want to purchase new passenger vehicles, including motorcycles, or commercial vehicles from contracted companies that make them domestically. In addition to this, the banks will offer similar credit conditions for the social needs of individual customers under appropriate conditions. Agreements will be made with companies that have locally produced furniture, electronics, white goods, home textile, dowry and bicycle sectors and so on.

The Turkish government is determined to counter the adverse economic effects of the coronavirus pandemic and boost economic growth in general by providing long-term, Turkish lira-based and low-cost financing programmes in the coming period. Falling interest rates have enabled the government to promote this strategy. The government particularly aims to support growth in the tourism, automotive and construction sectors. Aware of the potential of a growing current account deficit, dwindling foreign exchange income, and the difficulties of obtaining funding from international money markets, the government has increased custom tariffs on imports ranging up to 30% and has made it clear that it will be encouraging domestic production wherever possible.

In March this year Turkey had unveiled the Economic Stability Shield relief package to help companies cope with the economic fallout. The Turkish Treasury and Economic Minister Berat Albayrak said last week that the value of the relief package had reached TL 260 billion (USD 38 billion) so far, and that with the multiplier effect, the size of the bailout package had reached nearly TL 600 billion, equivalent to 10%-11% of the country's gross domestic product (GDP). Albayrak added that some TL 40 billion in financing has been so far provided to nearly 7 million citizens as part of individual basic need support introduced by the public banks within the scope of the relief package.

There has been much criticism from economists regarding the government’s new loan programme since the terms of the loan packages are considered too generous. Many borrowers may be tempted by the loans, but not have the funds to ensure regular payment of instalments. The low interest rates on offer will also present a risk for banks as the profitability of the loans is in question in the longer term. Questions have been raised as to how these loan programmes will be funded, and it is assumed that the government will have to support the state banks. Such a move will in effect be seen as nothing other than the printing of money.