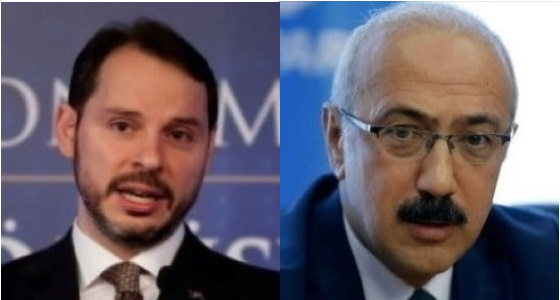 Following Turkish Finance Minister Berat Albayrak’s resignation on his personal Instagram account on Sunday evening of November 8th, there was much confusion since there was no immediate response from government sources.  Lacking official comment, pro-government TV channels and newspaper websites ignored the news until late on Monday evening when the presidential communications office issued a statement declaring the resignation had been accepted.

Albayrak’s decision appeared to have been made in haste, and follows the surprise dismissal of Turkish Central Bank Governor Murat Uysal on Saturday after just 16 months in office. It has been claimed that Albayrak, who supported Uysal, was not consulted about his removal. However, there have been other underlying issues at stake. Albayrak’s handling of Turkey’s struggling economy has come in for much criticism from Turkey’s opposition and international investors. The Turkish lira had lost over 40% of its value against the US dollar since the beginning of this year, making it the worst performer in emerging markets. It has been estimated that some USD 120 billion had been spent in reserves to prop up the Turkish lira.

Lütfi Elvan, 58, studied mining engineering at Istanbul Technical University graduating in 1983. Elvan received a scholarship from the state-owned mining company Etibank for further study abroad and he gained a master's degree in the fields of mining engineering and operations research at the University of Leeds, England in 1986. In 1995, he received a further master's degree in economics at the University of Delaware, USA. In 1989, he moved to the State Planning Organisation (DPT), and worked as a specialist until 1996 when he was appointed Head of Department for Regions with Development Priorities. He served at this post until 2002 when he was promoted to Deputy Undersecretary of DPT. In July 2007, he resigned from his post to enter politics. He joined the ruling Justice and Development Party (AKP), and was elected into the Grand Assembly of Turkey in the 2007 general election as an MP for Karaman Province. Elvan became one of the party leader's head advisors, and, in parliament, he was appointed Head of the Hungary-Turkey Inter-parliamentary Group. Elvan was re-elected into the parliament as the MP for Karaman in the 2011 general election, and for Mersin Province in the 2015 general election. He served as the chairman of the parliamentary Budget and Planning Commission. On 26 December 2013, Elvan became the Minister of Transport, Maritime and Communication, succeeding Binali Yıldırım during Erdoğan’s cabinet reshuffle, and served as deputy prime minister between 2015 and 2016.

The replacement of the governor of the Central Bank on Saturday and the resignation of Berat Albayrak on Sunday followed by the appointment of his replacement Lütfi Elvan as Finance Minister were met very positively by the money markets. The Turkish lira, having fallen to TL 8.52 to the US dollar by Friday evening, surged to TL 7.80 on Thursday, an increase in value of over 8%. The Istanbul stock exchange BIST 100 index also increased by over 8% since last Friday.

It is clear that investors are placing new faith in the fresh faces appointed to Turkey’s economy team this week, and there is renewed optimism in economic circles. The new finance minister’s and Central Bank governor’s pledges to combat the nation’s double-digit inflation and pursue predictable monetary policies in effort to stabilize the Turkish economy were reassuring. However, investors are now waiting to see if they follow through with a key interest hike during a monetary policy committee meeting scheduled for November 19th. This move would signal a shift away from Erdogan’s long-held stance that higher interest rates cause inflation rather than reduce it, in contradiction to common economic theory. Speaking to AKP lawmakers in Ankara on Wednesday, Erdogan said the new appointees would usher in a new era of stability and that Turkey would “swallow a bitter pill” if necessary to improve the nation’s economic prospects, giving an indication that he may allow an interest hike and tighter monetary policies.

If the government fails to introduce a significant hike in the policy interest rate next as is expected, there is another risk that there will be a further run on the Turkish lira.