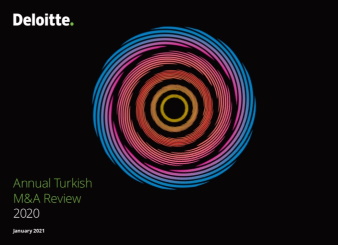 An increase of 69.8% and 30.5% in terms of deal volume and deal number, respectively, from the previous year was recorded.

In the introduction to the review, the following summary was made :

“In a year marked by the Covid-19 pandemic, global M&A activity slowed down in the first half of 2020 due to lock downs, travel bans and uncertainties where many large deals have been cancelled or delayed. Although the deal making activity has picked up in the second half of the year, the uncertainties remain in the global economy.

Following an initial pause in M&A deals at the start of the pandemic, the Turkish M&A activity showed signs of a notable recovery since June where the national lockdown was lifted and deal making activity outperformed expectations. 304 deals have been recorded in Turkey with a total deal value of USD 9.0 billion. While significantly down on historical levels, volumes are higher than had been expected. Turkish M&A broke a new record this year by exceeding 300 transactions in a year for the first time. Out of 304 deals, 133 had a disclosed value adding up to c. USD 6.3 billion. Considering the estimated value of deals with undisclosed values, we estimate that total M&A volume was around USD 9.0 billion, corresponding to a growth of 70% y-o-y (2019 – c. USD 5.3 billion via 233).

M&A activity was once again characterized by small and middle market transactions with the abundance of early-stage investments. On the other hand, only two big ticket deals made up 40% of total deal volume. The acquisition of the Turkish mobile game company Peak Games by the US-based game developer Zynga for a record breaking USD 1.8 billion was the first «unicorn» deal in Turkey. While Zynga made the largest acquisition in its history, the deal was marked as the largest transaction involving a Turkish start-up.

The annual deal volume was furthermore led by the Turkey Wealth Fund transactions including the acquisition of a controlling stake in the GSM operator Turkcell for USD 1,8 billion. Following a number of acquisitions with a total value of USD 953 million, Turkey Wealth Fund has consolidated public insurance companies which stood among the largest transaction of the year.

Although global pandemic uncertainties are likely to persist in 2021, the investors are actively seeking good opportunities in selected sectors especially those which will be able to adapt to the post-Covid era. The volatility in Turkish Lira made valuations of Turkish businesses more attractive for international investors. Looking ahead, we anticipate a further recovery in the Turkish M&A activity in the upcoming period.”