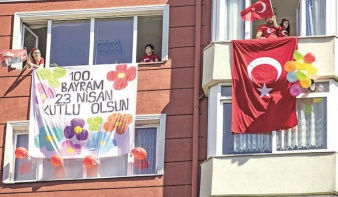 Turkey yesterday celebrated national sovereignty and children’s day. This day, April 23rd, a public holiday, is the day that the Grand National Assembly of Turkey was founded in 1920, exactly one hundred years ago. It is the only holiday which is devoted by Atatürk to all children to whom he entrusted the protection of the sovereignty and independence of the Turkish state.

The Turkish government had decided to implement a four day curfew beginning from Thursday April 23rd and ending on Sunday April 26th to help stem the spread of coronavirus. It is the government’s priority to keep the economy moving during the pandemic. For this reason, it has started to introduce curfews at weekends only, starting on April 11th. Since April 23rd is a public holiday, it was therefore decided to implement a curfew on this day, a Thursday, and also on the following day of Friday to bring about a four day long curfew.

As a result of the curfew, whereas in the past April 23rd was celebrated with solemn ceremonies nationwide with children performing in the country’s stadiums and streets, this year the Turkish populace was forced to celebrate the national sovereignty and children’s day from their homes. Indeed, the day was especially important because it was the 100th anniversary of the founding of the Turkish parliament, and it was decided that everyone would take their places on their balconies at 9 o’clock in the evening and sing the national anthem while waving the Turkish flag. Sound and light shows were also carried out in city centres along with firework displays, to be televised to the nation.

As of yesterday April 23rd, the total number of confirmed coronavirus cases in Turkey was 101,790, and the number of deaths was 2,491